The Altar of Peace

The Ara Pacis – the altar of peace – as reconstructed under its modern cover building.

Augustus was a great builder.  According to Suetonius,   he found Rome brick and left it marble.  Much of his work however was reorganising and rebuilding – he rebuilt three major aqueducts.  His biggest single new building was the forum of Augustus which he erected next door to the forum of his predecessor Julius Caesar, although today both are rather overshadowed by the forum of Trajan built a century later.

He also built three major temples, including the large temple of Mars, but many of the new buildings in Rome were either done in the names of his family or done by wealthy citizens, encouraged by Augustus. (Interestingly, he rather boasts about this in the Res Gestae, his autobiography, i.e. he boasts about his own modesty. This to me rather typifies Augustus who was inside a mass of contradictions which he managed to sort out on the surface.  Yes, he was modest, but yes he boasted about his modesty). However there is one particular building which was very much his own, the Ara Pacis, or the Altar of Peace.

This is a comparatively small building erected in the Campus Martius – the field of Mars – at what was then the edge of the city.  The dedication is significant – the altar of peace.  Of course as Syme pointed out Augustus’ reign was occupied almost continuously by war in one province or another.  But I think this view lacks a comparative viewpoint – did any of the pharaohs in Egypt ever erect a temple to peace?  Indeed is there any earlier temple to peace anywhere in the world?  This was Augustus’ message.  This was what he wanted to believe and the reason why he was so popular, and why henceforward the Romans themselves talked about the pax romana – the Roman peace.

The central figure is surely meant to be Peace surrounded by her benefits, the children and the fruits of the earth. However the idea of deifying peace was a new one, so the central figure has been interpreted as Tellus – Mother Earth, or possible Venus Genetrix- the founding goddess of the Julian dynasty, or possibly even Italia. Elements of all three are surely swept together to make this new image of “Peace”.

The temple itself has been splendidly reconstructed of hundreds of small fragments, so one can see it as originally intended.  From the front a flight of stairs led up to a small single room in the side – it is the sculptures on the outside that are significant.  The best preserved are the pair at the rear.  To one side is a figure of a seated goddess.  It has sometimes been identified with Tellus – mother earth, but it equally could be Venus Genetrix, or probably Peace – but since the idea of Peace as a goddess was a new concept, she was probably an amalgam of several different concepts.

Aeneas founding Rome. Bottom left  is the white sow, who according to prophesy who would show him where Rome was to be founded. In the background top left  is a  miniature model of a temple, which Aeneas  had brought with him from Troy and which contained the Penates, the household gods of Rome. Aeneas accompanied by children is about to make sacrifice. The whole scene is taken from Virgil’s Aeneid which had only been published ten years before.

On the panel on the other side of the door is a figure probably of Aeneas, the legendary founder of Rome. At his feet is the white sow who marks the site of the future city of Rome. In the background is a miniature shrine in the form of a temple, which contained the penates, the household gods of Rome which had been rescued by Aeneas from the burning Troy and brought to Rome. There are two young lads who are attendants to assist in the sacrifice.  What is interesting is that the scene appears to make quite specific reference to the story told by Vergil in the Aeneid , yet if the temple was first announced in 12 BC and completed in 9 BC, we should remember that Virgil had only died ten years earlier in  19 BC,  leaving the Aeneid incomplete.  But this shows the tremendous impact it must have had,  that it was immediately accepted as providing the foundation myth for Rome. (Was there some pre-existing story of the Aeneas meeting the white sow and the 30 suckling piglets  – of had Virgil made  it  all up – as  I suspect. It demonstrates the immediate success of Virgil’s poem). 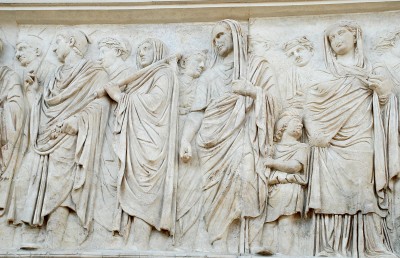 The friezes on the sides show processions. That on the south  side shows Augustus and his family. Here the central figure, dressed in a toga, but with the toga pulled over his head to show that he was a priest, was probably Agrippa, Augustus’ colleague and son-in-law. To his left is a lictor, holding an axe. The  child to his right is often identified as his son Drusus, but Amanda Claridge points  out that he appears to be wearing a  torc round his neck, and could therefore be a foreign prince, brought to Rome as a ‘hostage’ to learn Roman ways.

On the long side there are pictures of processions.  In one of them Tiberius or possibly Agrippa can be identified accompanied by his son Drusus (and also Augustus’ grandson for he was married to Augustus’ daughter Julia).

The frieze on the north  side shows a procession of priests. When a Roman was acting as a priest he pulled the folds of the toga over his head. On the left is a figure not wearing a toga but a tunic and carrying a jug and a box which no doubt contained incense and who is presumably an assistant, possibly a slave of the temple.

On the northern side is a procession of priests all wearing togas and one of them with the toga stretched over his head to show that he was acting as a priest.  However at the end is a young man who is not wearing a toga but a short tunic and carrying a jug in one hand and a box in the other, probably containing incense.  It is assumed that he is an assistant, possibly a temple slave.

The Ara Pacis was built on a low lying part of the Campus Martius down by the river, and it soon suffered from flooding, so eventually it was overthrown and smashed into numerous small pieces which were buried under deep layers of silt.  In the 16th century a few fragments were recovered while building the foundations for a later palace and more fragments were recovered in the 19th century.  Eventually in the 1930s Mussolini ordered that all the fragments were to be recovered.  The foundations of the 16th century palace above were to be shored up and the ground was frozen in an amazing display of the wonders of fascist technology.  The fragments were all reassembled and a new site was chosen for it a couple of hundred yards away.

Augustus built a grand mausoleum where he and his family were buried. In the Middle Ages it became a castle, but Mussolini decided to make it the centre of a grand square – the Piazza Augusto Imperatore. Grand buildings were erected round three sides and at the bottom the Ara Pacis was restored and re-erected in a grand new cover building. In this aerial photo (a photo of a photo in a modern display) the River Tiber is at the bottom.

Here was another major Augustan site, the Mausoleum of Augustus, a huge circular structure where he and the members of his family were finally buried.

One of the grand buildings along the side of the square – a fine example of fascist architecture.

Much of the mausoleum was destroyed but the mound survived and it was to be the centre for the new Piazza Augusto Imperatore , a magnificent achievement of fascist town planning.

The original Mussolini cover building of the Ara Pacis as designed by the architect Victorio Morpurgo.  Morpurgo was one of the leading Fascist architects until 1940 when Mussolini linked up with Hitler, when it was discovered that Morpurgo’s father was a Jew, so he had to shrink back and take a very low profile. After the War he bounced back and became the Professor of Architecture at Rome University.

On three sides it was to be lined with the finest fascist architecture, and on the fourth side the ara pacis was to be reconstructed and a glass covering was re-erected all to the design of the Italian architect Vittorio Morpurgo.

Unfortunately however with the prospect of war ahead the actual cover building of the ara pacis was shoddy in construction and by the 1980s it was leaking badly and needed major renovations.  Rome by this time had a communist mayor, so he decided that it was all to be pulled down and be replaced by a grand modern building designed by an Italo-American architect Richard Meier.  This too was controversial, and when the communist mayor was succeed by a right wing mayor, he proclaimed that it should all be pulled down and rebuilt again.  However, economic reality has intervened – the building does not leak, and it provides a light and airy ambiance for the Roman remains.  It seems likely to survive.

The mausoleum of Augustus, which is adjacent, is also being restored. It had  become neglected,  and when I was there in 2010 restoration was in progress.  I believe it has now been completed and the whole complex provides a fascinating monument to the  ambitions of  Augustus, and provides also one of the best surviving examples of fascist town planning  — together with an interesting example of modern architecture.

The side of the new cover building on which the Res Gestae of Augustus are inscribed.

On the side of the modern cover building a copy of the Res Gestae  – his autobiography, has been inscribed. The original, the most complete copy, is in Ankara in Turkey.

Detail from the central panel of the Res Gestae.

But seeing it inscribed on the wall here gives some idea of the length of the inscription.  Augustus wanted to record his own version of history and here he did so in considerable style.

on to Augustus’ marriages

or, Who was Augustus?