It is always fascinating to compare Constantine with his predecessor Diocletian; for if Diocletian was the great innovator, Constantine was the great consolidator. In business terms, he was the supreme CEO, the great managing director who, having seen what needed to be done, went on and completed the job. Let us look briefly at three further example of how he reorganised the Roman Empire: money, the army, and administration.

It is often said that whereas Diocletian tried to solve the problem of inflation with his Price Edict, but failed, Constantine solved the problem by going over to gold. Gold is in many ways a much better metal of value than silver, because it is less easy to debase. It is easy to debase silver gradually as the early emperors demonstrated but it is much more difficult to debase gold, as it is quite easy to test its purity with a touchstone. There had been a gradual changeover to gold in the latter days of the third century, but Constantine achieved success by introducing a new coin called the solidus, 72 to a Roman pound, and of pure 24 carat gold. The solidus was a great success and continued in the in use almost down to the end of the Byzantine period in the ninth and 10th centuries A.D. Indeed its memory lingers on, for the word solidus underlies the English shilling and the French sou, and indeed the word soldier is also derived from solidus as being someone who is paid a solidus for his services.

(I am told that the reason that the coins maintained their purity was because towns were required to pay their taxes in gold coins. However, when the coins were received, they were all melted down, and the resulting gold weighed. If there was a shortage, then the town councillors were required to make up the difference in person. This was a powerful incentive to ensure that gold maintained its purity. The same source also informs me that though the solidus was tariffed at 72 to the pound, the previous coin, the aureus was tariffed at 60 to the pound, so Constantine made a big profit on his new coinage. That is why he called it the solidus saying it was solid when it was in fact the opposite – but that is the art of advertising and the wisdom of central banks.)

Where did he find the gold?

Gold coin of Constantine minted at Sirdium in Yugoslavia. Note that Constantine is looking up to heaven for his salvation.

The only problem with going over to a gold coinage is where you get the gold?  Here Constantine had two main sources. One was the treasure  amassed by his former colleague Licinius, who had been the Augustus of the east, but who had been defeated by Constantine in AD 324.  Unlike Constantine, Licinius was extremely frugal and had built up a substantial Treasury of gold. But the most important source is said to be the treasures that Constantine took – perhaps looted is too harsh a word – from the pagan temples, whose treasures he felt that he, as a Christian, could expropriate at will; and these treasures formed  the basis of his new currency. Becoming Christian was financially a very good turn.

The success was to some extent limited because gold is too valuable for every day transactions, for which copper continued to be used – and continued to lose its value. Little pretence was now made to present a silver coin,  and the copper coins were produced by the millions to pay the soldiers: the idea of inflation was at this time entirely unknown – indeed inflation as a concept remained unknown until it was recognised by the Tudors. Coins were simply produced to pay the soldiers with no thought for the consequences. (Not unlike many modern economies). But whereas during the third century, monetary payment to the soldiers had been largely replaced by payment in kind, now some element of monetary payment was reintroduced:  and perhaps by now everyone had adjusted to the reality that copper coins would always lose their value.

This silver bowl from the Mildenhall treasure was surely used as a display of wealth in late 4th century Britain.

Indeed, a new form of value came increasingly into use,  that of silver as tableware, dinner sets which were often formally given away by the emperors to their favourites as a reward. A number of these hoards have been discovered particularly, rather surprisingly, in Britannia where the best known is that found during the war at Mildenhall.

We should perhaps look briefly at some of the reforms Constantine introduced into running of both the army and the civilian administration.  It is hard to know how far some of them had been introduced by Diocletian if not earlier, but here we can see Constantine’s managerial efficiency at work.  The Army was reorganised into two separate forces. One was the field army, known as the comitatenses, from ‘comes’ or companion. This was the crack fighting force, an army that in theory could move round the empire to fight invaders. On the other side were the limitatei, that is those who guarded the frontiers (= limes). They were expected to be stationary, attached to a specific fort and ended up by being farmers as much as soldiers. The division had in practice been in existence right from the beginning of the Empire: in Britain there was the distinction between the legions stationed in legionary fortresses at York, Chester and Caerleon, and the auxiliary troops, who manned the forts along Hadrian’s Wall. Now the division became more formal, though the details of the system have only come down to us in the document known as the Notitia Dignitatum, which was compiled a century or more later.

Constantine also made clearer the distinction between military and civilian careers. Hitherto the Roman administrator was expected to be both an army man and an administrator.   The crucial figure in the Roman administration of the third century had been the Praetorian prefect. Originally he was the commander of the Praetorian guards, which Tiberius, the second emperor, had established in a special camp just outside the city of Rome to be a private bodyguard for the Emperor.  The influence of the praetorians increased by leaps and bounds and the praetorian prefect eventually became the second in command to the Emperor and the second most important man in the Empire. Constantine disbanded the praetorians, and  split the job. He introduced a new rank of the magister militum, the master of the soldiers, who commanded the Army, while the praetorian prefect was restricted to civilian administration, still a very important role.

The affairs of the Treasury were also tidied up.  The first emperor, Augustus,  had introduced the distinction between the emperor’s private property and that of the state. A similar division in fact exist today in England, where  Buckingham Palace and Windsor Castle are the property of the state where the Queen only lives  as a guest of the state. But the Queen does in fact have her own property, notably the castles at Sandringham in East Anglia and Balmoral in Scotland. These are her own private property and do not belong to the state. 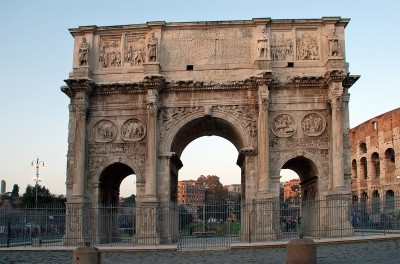 The Arch of Constantine was erected in 312-315 by the senate in honour of Constantine, following his victory at the battle if the Milvian Bridge. Note the amphitheatre in the right background.

Similarly, in Rome, the Emperor had what was originally known as his patrimonium, his own property. Later this became known as the res privata, that is the private ‘thing’ as against the res publica, or the public ‘thing’. And since emperors tended to confiscate the property of those who crossed their path and were put to death, the res privata grew rapidly. Indeed, there was also what was known as the comes sacrarum  largitionum, the count of the sacred largesse – which sounds rather splendid as the master of sacred bribery, though in practice this had a more defined function of looking after the mints, mines and the state factories.

The functioning of the Roman state emerged in a rather more efficient form after the reforms of Diocletian and Constantine than it had become in the chaos of the third century, though so it must be said it was rather different and substantially more intrusive than the bureaucracy of the second century. But Constantine was extravagant. Diocletian had introduced some of the crucial elements of barbarism in making people call him Dominus and bow down in obeisance when entering his presence.  Constantine was less grand, particularly where bishops were concerned. He saw it as his duty to get the church organised, just as he got the state organised, so he was the one who summoned the great councils. Nevertheless, at least outwardly he respected the superior knowledge of the bishops.

But how far is it fair to call Constantine just a CEO – the chief executive officer? Certainly he was a superb administrator, who  settled the Empire and make it secure,  and finished off some of the reforms that Diocletian introduced. But he was also a great innovator and in his founding of Constantinople and his adoption of Christianity he made the two biggest changes to the Roman Empire that had taken place since Augustus. He was very much more than just a CEO and the fact that the Empire, survived a further century in the West, and for nearly a further millennium in the East is a tribute to his longsighted genius.

It is interesting however to see that excesses principles of gift exchange were creeping back. He was lavish in his `expenditures, on Constantinople, on himself and on his friends.  A H M Jones, summing up his achievements in his magisterial book, proclaimed: “Constantine has many great achievements to his credit. He firmly established Christianity. He built a new capital, which was to outlive the old Rome by nearly a millennium. He organised an efficient mobile army and laid the foundations of a sound gold currency. But he set a standard of extravagant expenditure and a reckless fiscality which undermined the economic stability of empire.” (Page 111)

On to Julian the Apostate

Or, Onto The Fourth Century