The most notorious site of classical Sparta is the temple of Artemis Orthia, where young boys were publicly flogged as part of their initiation rites,  in order to toughen them up.

Two versions of the ceremony have been recorded. Xenophon records that cheeses were placed on the altar and the boys had to run the gauntlet to steal the cheeses, and having stolen a cheese then had to run back, again receiving a good whipping.

The site of Artemis Orthia. The Temple is situated at the centre with the altar at the far right. The whole of the bottom left of the photo is occupied by the seating of the theatre that was built round it in Roman times. In the distance is the modern town of Sparta, with beyond it Mount Taygetus.

Pausanias gives a different version, in which the boys were beaten at the altar. The priestess stood by carrying the wooden statue of the goddess, and if the boys were not beaten hard enough either because they came from a good family or because they were too good looking, she would complain that the statue was getting heavy and that the goddess demanded more blood, and they should be beaten harder until they bled. It was thought that a long session of beating like this would toughen the boys up and make them into formidable Spartan warriors. It appears to have been an initiation ceremony, where you had to be flogged in order to be accepted as a Spartan warrior.

In the Roman period, it became a very popular spectator sport to see boys and young men being flogged in this way. The spectacle was great fun, and in the third century AD, the temple was enclosed by a theatre where spectators could watch the floggings. The building of the theatre seating had the fortunate by-product in that earlier remains were preserved under the later seating and early in the 20th century the site was excavated by the British School at Athens with remarkable results, revealing that in the early period, that is the eighth to sixth centuries BC, the artistic standards of the offerings made at the temple were very high indeed — as fine as anything found anywhere else in Greece at that time.

This stitched-together panoramic view gives a good impression of the arrangements, with the altar at the centre and the temple to the right. When we were there in 2008, the site was in the process of being re-displayed, which is why it looks a bit bare. Previously the site had been rather neglected and gypsies had moved in, but it had just been restored with the aid of a large EU grant. It had not yet been re-seeded, why which is why it looks rather barren, but the details can be seen very clearly

Detailed view of the Temple at Artemis Orthia. It was a very small Temple!

It appears that Orthia , or Worthia in some inscriptions, was a local goddess only found at Sparta and Messene who was later identified with Artemis, both being goddesses of the hunt. Orthia was originally a goddess of fertility and the wild margins and closely associated with the hunting of wild beasts. (At Messene, Orthia was a woman’s god of childbirth: the masculine flogging element is unique to Sparta). The earliest offerings at her shrine go back to the proto-geometric period in the 9th century BC, but around 700 it was enclosed by a wall and paved with river cobbles, enclosing both a part stone temple with an altar in front of it. It appears that around 575 the nearby river Eurotas overflowed and flooded the site so the ground was raised, and it was levelled off with a layer of river sand, and a new temple was built of limestone with an altar in front of it. Offerings continued to be made throughout the 6th century, but it was not until the 2nd century BC that there are again signs of rebuilding. Then in the 3rd century AD it was again rebuilt, when the theatre seating was built round the outside.

These votive offerings were made of lead – cheap and popular? Were they perhaps offerings for a safe childbirth? Many of these were in the form of a winged goddess, Orthia perhaps being a goddess of childbirth.

Numerous finds from the earlier period were preserved in the Roman rebuilding. By far the greatest number of finds were the small lead votive reliefs of which many thousands were recovered. These were made of lead and were mass-produced, being cast in shallow clay moulds. They were cheap and popular, and many may have been offerings by women who had just given birth — Orthia was thought to be a suitable goddess to ensure safe childbirth.

These votive offerings from Artemis Orthia suggests that Orthia was also a goddess of animals. Although crude and mass-produced, they nevertheless give some idea of the liveliness of artistic work at Sparta in the seventh and sixth centuries BC.

Others were animals, showing both wild animals, including lions, and a deer, showing Orthia in her role as an animal goddess or huntress in which capacity she was merged with Artemis.

Statuette, presumably of the goddess.

There were over 200 ivory objects, including a little statuette of the goddess with her long skirt ringed in the fashion of the earlier geometric period.

Resting animal – sheep? ram? from the finds at Artemis Orthia

There are also a number of crouching animals like this sheep or ram. (These illustrations all come from the Fitzwilliam Museum in Cambridge which received some small finds as their share of the finds from the excavations at a time when it was customary to divide up the finds between the host country and the country that carried out the excavations.)

Some of the pins, brooches and other domestic ornaments deposited as ritual offerings. 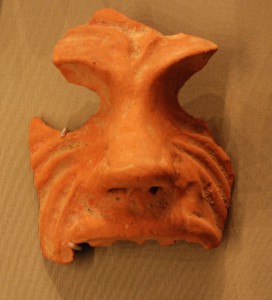 There were also a number of clay masks, perhaps copying the grotesque masks worn in ritual dances.

There was also considerable evidence for Roman Sparta at Artemis Orthia, not only in the archaeological remains of the seating arrangements surrounding the temple, but also in a number of over 50 inscriptions, dedicated by the leaders of the re-founded educational system. In the later period, substantial reforms were carried out at Sparta as a whole. The first was in the 2nd century BC, when there were major reforms by Agis and Cleomenes who were concerned by the falling population at Sparta and wanted to revive the glories of the Sparta of old. More substantial reforms took place in the 2nd and 3rd centuries AD when attempts were made to turn Sparta into a sort of athletics university to rival the intellectual university at Athens.

Boys of 14 – 17 (‘Ephebes’) were arranged in age groups under the leadership of a ‘herd leader’. Part of the time they indulged in singing and hunting dances, but three types of sporting activities are mentioned: there was wrestling, then a ball game consisting of five teams, each fourteen strong, playing a game that sounds not unlike American football; and finally there was a contest of endurance when teams attacked the altar, which was defended by whip bearers. Women also took part and there is a scandalised account of a Roman senator in the time of Nero named M Palfurius Sura who carried out a wrestling match with a Spartan girl. Romans even took part and there was a statue to one, C.Rubrius Vianor for his excellence in the Gymnasia.

Central to the revival of the customs at Artemis Orthia was the Festival of the Whips the ritual flogging of the Ephebes, or teenagers, known as the diamastigosis. This appears to have changed over the years. Tony Spawforth argues that it began with an active version where rival teams had to steal cheeses from the altar, a ceremony celebrating the battle of Plateia in 479 BC where one team armed with whips defended the altar, while the other team had to endure a good whipping to steal the cheeses. This mutated into a more passive version where teams of teenagers competed with each other to be flogged at the altar and see who could take the harshest flogging.

Cicero in his philosophical work the Tuscan Disputations says that when he was there (around 78 BC) Spartan boys were scourged at the altar until blood flows in abundance – yet not one of them was ever heard to cry out or even groan. The spectacle appears to have continued throughout the Roman period and the Festival of the Whips is even recorded by the philosopher Libanius as late as the 370s AD. It appears that to the end, Artemis Orthia retained its importance as the scene where the floggings took place where Spartans had to show their endurance and that by accepting the most extreme pain, they could demonstrate that they were indeed, Spartan.

On to Roman Sparta