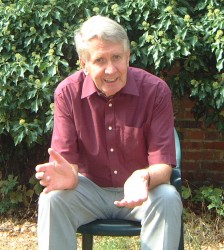 What is civilisation? The BBC has twice asked his question and has twice failed to give an answer. So let me give you the secret. Let me start by saying that civilisation is the opposite of totalitarianism. It means talking about freedom and democracy, and the ability to ‘do your own thing’.

This in turn depends on economics, for freedom depends on choice. At its lowest level, it is the choice of what to buy, what to eat, how to live. And this choice depends on one thing: money. In a primitive society, distribution depends not on barter but on gift exchange: you pay tribute to the ruler, and the ruler (sometimes) allocates ‘gifts’ to you. Money makes much more extensive choice possible, and this more extensive choice is the basis of civilisation. Money was invented by the Greeks and Romans, so the Greeks and Romans invented civilisation, not only in the everyday things of life, and indeed in democracy but also in the higher matters of art, history and philosophy.

So here, in these pages, I look at five societies to see how they worked. First I look at three pre-money societies, based round palaces where the ruler decided how everyone should live and what they should do; and I then compare them with two market based societies which were based around the forum or marketplace: Greece and Rome.

My name is Andrew Selkirk and I have spent my life as the founder, editor and largely the writer of the magazine Current Archaeology. This meant that I have been in two worlds, that of academia for my writing, and that of business for running a magazine. I straddle both. This has been wonderful but the trouble was that I have written about the past in bits and pieces, from the Palaeolithic one day to the Post-medieval the next; so now in my retirement or semi-retirement, I want to pull it all together. At first I thought I would write a history of the world, but I soon found that would be too big a task, so I have settled down to one of the most important subjects of all, what is civilisation? And combined with this, why are Greece and Rome so important? I look at this from the two very different perspectives of the academic and the businessman. Here you can read my progress, so far.

First, a brief preamble. Just how did pre-money economies work? Barter is the common explanation, but in fact barter was rare, so I start by travelling to the Western Pacific, to the Trobriand Islands to find out how the great anthropologist, Bronislaw Malinowski worked out how gift exchange worked.

I then get down to finding out how three great Palace civilisations worked. I begin with the Minoans because they have the best palaces – four of them are known and excavated. Here we can see that the big focus is not great throne rooms, but rather vast magazines where olive oil was stored for everyone to admire the wealth of the ruler, and from which gifts could be made probably in the form of fragrant cosmetics. At the centre were the great courtyards where bull-leaping took place where young man men had to prove their prowess by leaping over bulls, while the famous bare-breasted ladies admired them.

And then to Egypt, the greatest of these early societies. The great pyramid was a magnificently useless monument, but for over 4000 years it was the tallest building in the world. The American pyramids were only half as high and the Romans for all their prowess never approached anything so high. Totalitarian societies can be terribly successful when they put all their efforts into just one task – think of the Russian success in putting up the Sputnik.

And then we come on to the society that tends to destroy all theories on history: China. The Chinese certainly threaten to disrupt my theories because China had money almost as early as the Greeks. But they remained firmly a Palace economy based on an Emperor – they still are. They were also very long-lived – they had no ‘Middle Ages’ – and for a thousand years they were well ahead of the West. But eventually they were overtaken by the West and I like to think I’ve cracked the secret of their success and their failure, and how they are now very successfully re-inventing themselves.

But then we come onto the second part of my story: Greece and Rome. And here I must confess that I am essentially an archaeologist, which means that first I look at the remains on the ground and under the ground. I analyse cities. Hitherto we have been looking at societies where the cities are based round the seats of the rulers — palaces or temples. Now we begin to look at towns centred round the marketplace, the forum, or agora in Greek. I sometimes wonder how one analyses modern towns. Is the biggest building the football ground? Or the out-of-town shopping centre? Or the huge factories? Or should we seek to analyse the houses on which we lavish our care and attention?

The fascinating thing about Greece is that money and democracy came into use more or less simultaneously. But the story is more interesting and more complex than I thought it would be. Most accounts of Athens begin by visiting the Acropolis with its wonderful temple. I begin instead with the marketplace, now wonderfully excavated and restored, where not only will you find traders inventing the market economy, but also the most elaborate early attempt at democracy, where the Council was chosen not by election, but by lot, which the Athenians will tell you is by far the most democratic way of choosing councillors. Only then do I look at the marvels of the great temple, the Parthenon as well as the theatre and the workshops where the potters produced all those marvellous red-figure vases.

In some ways even more interesting is the town that rejected money: Sparta. The Spartans had conquered their neighbours and had to keep them as virtual slaves, and therefore they had to turn themselves into soldiers – and they became very successful soldiers. They lived in barracks, and instituted a very strict form of education: it is ironic that the only contemporary temple is that of Artemis Orthia where young men were flogged in order to toughen them up to be good soldiers. The Romans built theatre seats round the temple to watch this fascinating spectacle.

And finally, Rome. Today the Romans are terribly maligned by the academics who believe that they were simply brutal soldiers. The truth is that it was not so much that there are good soldiers, but that they were good peacemakers and when they eventually, after many mishaps they won their wars, they went on to do the far more difficult task of winning the peace. The secrets were the ‘Latin rights’, the rights of free trade, migration, and intermarriage, which meant that for the ordinary people, life under the Romans was superior to the life offered by their own rulers. And Italy flourished.

Democracy however, did not. Democracy Greek-style can work well in a single city, but when you have a bigger state, people can’t travel to vote. And so the system broke down and dictators and civil war ensued. Eventually Augustus made himself Emperor. Augustus is also generally maligned and if you want to understand how the Roman Empire really worked, you must understand Augustus. I set out to rehabilitate this remarkable man.

But the decline and fall of an Empire is in many ways even more fascinating than the rise — and in some ways it is even more important for us to study as we approach the climax of the Industrial Revolution. Decline for us lies ahead: read what happened to Rome, to see that our decline is not followed by fall.

On to the Trobriand Islands

Or go straight to: