From Hannibal to Augustus: history and archaeology disagree

The history of the next two centuries at Rome is one of those interesting cases where history and archaeology totally disagree.

There are in fact three different stories. There is the story of Rome’s expansion, which sees a steady growth. With the defeat of Hannibal, Rome gained Spain as well, for it was in Spain that the Carthaginian empire was largely defeated. North Africa also followed, not indeed immediately, as peace was made with Carthage and it was not till 146 that Carthage itself was destroyed and North Africa became part of the Roman Empire. The same happened in Greece where ‘freedom’ was proclaimed in 200, but the Greeks misused their freedom and began fighting each other and so in 146 Rome came in and destroyed Corinth, and Greece was then put under Macedonia; and with peace came prosperity. And in Asia Minor, when the King of Pergamon died in 133 with no heirs, he left his kingdom to Rome, and Pergamon — essentially western Turkey — began a long period of peace and prosperity. 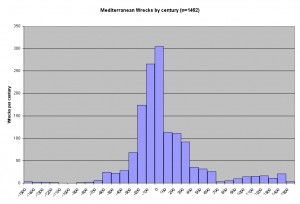 When did the Roman economy take off? This histogram shows the number of wrecks discovered in the Mediterranean from 1500 BC to AD 1500. It is assumed that the number of wrecks indicates economic activity; and remarkably it shows that the growth began sometime between 200 and 100 BC and fell off sharply after AD 100. Click on this map to see it full size: it is very illuminating. (Though the decline may be misleading because the ships may have become bigger).

Archaeology tells a similar story. The second and first centuries BC were the time that the Roman economy really took off. Suddenly, Roman exports began to appear everywhere. Indeed there are few other parallels to such an expansion except perhaps that of Britain in the 18th and 19th centuries AD. But everywhere throughout the Mediterranean, evidence for Roman trade is found, particularly in the form of amphorae, large jars carrying the Roman wines that were so popular, and also olive oil and indeed garum, the fish sauce that was the Roman equivalent of Marmite and allowed your up and coming peasant to spice up his boring gruel into something far more exciting. By the first century BC some of these amphorae and this wine even reached far-off Britain.

But the history, as it appears in the history books, tells a very different story — a story that forms the basis for today’s critics who see Rome in an adverse light as being military despots in a slave based economy. In the second century Roman bumbles on, but the late second century and the first century, politics in Rome became very messy. The story begins with the Gracchi, the two brothers Tiberius and Gaius who both tried to introduce land reforms and who were both assassinated for their pains — a Roman equivalent to the Kennedy Brothers. There is a famous story in Plutarch of how Tiberius Gracchus, on his way to Spain, journeyed through Tuscany and everywhere saw the poor farmers being squeezed out by the huge factory farms introduced by the rich few Romans. Archaeologically however these latifundia have not so far been found. The story everywhere is of the growth of medium-sized farms. Yet on this on these couple of sentences, the whole story of the Roman economy in the first century BC is based — and that story is all wrong.

The problems which the Gracchi failed to remedy then led to dictatorship first of Marius, then of Sulla, then of Julius Caesar, and after he too was assassinated, he was followed by the triumvirs who were almost as bad. It was only in a 32 BC at the battle of Actium that Augustus was finally able to see off his two fellow triumvirs and established himself as the princeps, the Emperor, and a new story begins.

One can but say that little of this appears in the archaeological record. The major political problem is the Social War of 80 BC, when many of the Allies revolted and had to be put down in a long and bloody war. However one should note that what they wanted was not to leave the Roman Empire, but to become more closely linked to it. They wanted citizenship, and though they were defeated in the war nevertheless they won their point. Rome, as so often, gave way, and in 80 BC, Roman citizenship was given to all those living in Italy. Once again Rome eventually did the right thing and laid the basis for further peace and prosperity.

The walls of Pompeii which withstood the siege by the Romans in 80 BC. The holes punched by the Roman siege machines can still be seen in places.

It is interesting to see what was happening in Pompeii. Down to 200 BC, Pompeii was still a small town, and although its extensive walls had been constructed in the fifth century BC, much of the area within the Walls was given over to agriculture. But from 200 BC Pompeii expanded enormously. The Social War of 80 BC was a disaster. Pompeii took the wrong side and was besieged by the Romans – the holes punched in the walls by the Roman siege machines can still be seen. A colony was imposed and new colonists were moved in to control the city. The language too changed. Hitherto the Pompeians had spoken Oscan and most of the inscriptions were in Oscan. After 80 BC virtually everything changes to the Latin and one would suspect that the new colonists became the aristocrats in the town. In fact this is not wholly the case. Certainly there were many new faces to be seen, with new names on the inscriptions, but many of the old names and the old families still continue. Above all, the prosperity goes ahead, and despite the warning earthquakes, Pompeii was still a very flourishing city when it was destroyed by Vesuvius in AD 79.

By the end of the first century BC Rome had become economically the most successful and the richest society that the world had ever seen.  Politically however it was a mess, and in the next section, we see how under Augustus the Roman republic became the Roman empire. However we must also ask ourselves how far our modern ideas of democracy need to be revised in light of the great success of the overthrow of the Roman republic, and its replacement by the Roman Empire.