Gaul met the Classical world early, in around 600 BC when the Greeks from Phocaea founded a colony at Massilia, modern Marseille.  Massilia flourished and became one of the biggest colonies in the western Mediterranean.  And – do not tell the Romans — for the first 300 years it may have been bigger than Rome itself. It certainly remained a firm ally of Rome against the Carthaginians and flourished until Julius Caesar came along, and Massilia foolishly backed Pompey and never got back into Caesar’s good books. 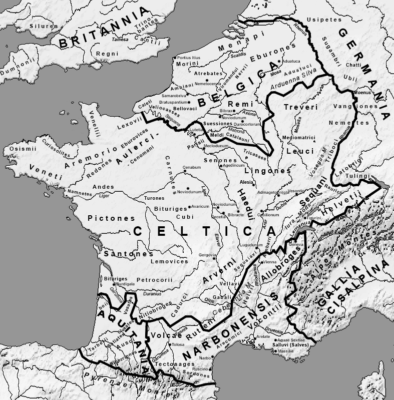 The Gauls generally were generally on good terms with the Romans, indeed when Rome was busy acquiring an empire in Spain, Gaul became a rather important transit area. A crisis came in 113 BC when the Gauls were invaded by fierce Germans, the Cimbri and Teutones, so they called on Rome for help.  The Romans responded, though at first they suffered a disastrous defeat at the Battle of Arausio.   Eventually the Romans got their act together and eventually under Marius they defeated the Gauls, and as a result they established a province in the south of France.  This was in effect Rome’s first province so it was simply called The Province.  Rome already had a province in northern Italy which it called Cisalpine Gaul, or Gaul this side of the Alps, and so their new province was called Transalpine Gaul and it was from here that Caesar set out to conquer Gaul.

Bust of Julius Caesar in the Turin Museum, said to be the only portrait made in his lifetime

It must be said that of all Rome’s conquests, the one that was the result of blatant aggression was Caesar’s conquest of Gaul. Caesar was an ambitious young man and very capable.  He tended to support the populares, the popular faction as against the optimates, the ruling elite, and this made him unpopular with the establishment.  Having served as consul, he was allocated Gaul as his province and he needed to do something with it fast, both to show off his abilities, and to make a lot of money too to pay off all the debts he had acquired from all the bribery he had to do to get himself elected as consul. He determined that Gaul would make him glamorous, and wealthy.

His first opportunity to intervene came when the Helvetii, who lived in modern Switzerland, determined to migrate en masse to Bordeaux.  They burnt their homes behind them and set off, but Caesar determined to send them back, and in a dazzling display of military genius and dastardly subterfuge, he succeeded and they have remained in Switzerland ever since, – which is why it is still called Helvetia.

The next opportunity came when the Germans threatened to invade.  The Suebi, the fiercest of the Germans, under their leader Arminius, who was called King of the Germans, crossed the Rhine, and the Gauls called on Caesar to stop them.  This was just an opportunity that Caesar wanted, and in a dazzling display of generalship he defeated Arminius and freed the Gauls from the German menace.

So far Caesar had been behaving with at least a cloak of respectability, coming in at the request of the Gauls, or some of them, to prevent migration.  But from this point onwards, Caesar became the blatant aggressor.  He first turned his attention to the Belgae, who lived in North West France and modern Belgium, and in a short brilliant campaign he subdued them.  He then looked to the North west, modern Brittany where the Veneti were doughty seamen.  At first their ships, built for the Atlantic, overpowered the Roman ships built for the Mediterranean, but soon he had new ships built, Atlantic-style, and the Veneti were conquered. It is always difficult to know what happened.  Our main source for the wars is Caesar’s own commentary written for the senate back in Rome.  Caesar was a brilliant writer producing elegant and simple prose.  It all seems wonderfully straightforward, but Caesar was a master propagandist.

What next? Caesar began to wonder about that strange land to the north, Britannia.  Ws it small or was it big?  Could it be easily conquered, or was it another continent, as big as Europe? He decided to have a look and in 55 BC he crossed over, was confronted by the white cliffs of Dover and fierce charioteers.  He managed to land, just, but the sea played havoc with his ships and he only just avoided disaster.  The following year 54 BC he came with a bigger force, marched inland, crossed the Thames and captured the stronghold of the great British King, Cassivellaunus. So far so good: but Britain was clearly a big place and troubles were brewing back in Gaul. The Britons agreed to pay tribute, so with honour only just intact, Caesar limped back to Gaul to face the brewing insurrection. .

Hypothetical map of the siege of Alesia, showing the double line of Roman circumvalation and contravalation. The breakthrough apparently came in the North West, i.e. top left corner

Dramatic painting by Lionel Royer of Vergingetorix on his horse, surrendering,  throwing down his arms at the feet of Julius Caesar, seated in red

Back in Gaul, the Gauls suddenly realised what was happening.  This was not just a temporary rearrangement of the playing cards; it was going to be the permanent subjection of the whole of Gaul to Rome.  They eventually united under a leader of genius, Vercingetorix:  the war went to and fro, but finally Vercingetorix holed up in an impregnable hillfort at Alesia.  Caesar set his troops building a huge wall right round it so that they could not escape.  But more Gallic troops were raised who threatened to attack the Romans from the rear, so Caesar set his troops to dig an even longer wall facing outwards to protect the Romans from the attackers.  Eventually the Romans managed to break the Gallic defences, Vercingetorix  dramatically surrendering by riding up on his horse and throwing down his weapons.  He was taken back to Rome, kept prisoner for six years, was paraded in Caesar’s triumph and finally executed.

Caesar was left master of Gaul, but there was no time to organise the new province: trouble was brewing at home, so he crossed the Rubicon, attacked Italy and the next four years were spent in a bitter civil war where he eventually triumphed in Spain at the Battle of Munda.  He returned home to Rome in triumph,  but the Romans were suspicious of great men, and when he tried to make himself Perpetual Dictator, he was murdered.  But triumphant even in death, in his will he left his name and his money to his 18 year old nephew who carried out the task of reforming Rome which Caesar had only just begun to dream about.

Caesar left Gaul traumatised. The historian, Plutarch calculated that a million Gauls had been killed, and a further million enslaved in the course of the Caesar’s conquest: though he took care to look after his allies, he was ruthless in punishing his enemies. Perhaps as a result of this terrible punishment, throughout all the chaos that followed his assassination, Gaul remained inert.  In 39 BC Augustus’s friend Agrippa was sent to Gaul as governor and laid out roads with military precision based on Lugdunum, modern Lyon, which was to become the capital of Roman Gaul. And in 27 BC Augustus himself made another visit to Gaul and began his reorganisation.

Caesar had said famously that all Gaul was divided into three parts: the Belgae in the north east, Aquitania in the south west, and Lugdunensis for the rest, and Augustus made this division permanent.  He also carried out a census.  This was the equivalent of the Domesday Book, doing for France what William the Conqueror did for England.  It was a traumatic affair with the army on full alert, but everyone was counted and their assets were reckoned up. A firm basis for taxation was established.

Augustus was in Gaul on four occasions, in 39/38 BC, 27 BC, from 16 – 13 BC and again in 10 BC.  His major re-organisation was when he spent three years in Gaul, from 16 – 13 BC.  Gaul had been arranged in tribes, though these were always loose and indeterminate.  He replaced the tribe by the civitas and these became permanent. Each civitas had a capital town, so that everyone in France was assigned to a civitas and every civitas was assigned to a town.  There were somewhere near a hundred civitates.  Everyone had been listed in the census and they were assigned to a civitas where they could also be taxed. The civitas capitals became the centre for Romanisation: all the ambitious young men of Gaul, and there were many, could help run their civitas capital, stand for election and become the mayor and help beautify the town. Romanisation was in progress.

Hypothetical reconstruction of the hillfort at Bibracte, which grew rapidly following the conquest of Gaul, but was then abandoned when Augustus moved the town to a new site down on the plain

The classic example of this was Bibracte. This was a hillfort, the capital of the Aedui who were the great allies of Rome. After the conquest, Bibracte flourished and excavations have revealed the rapid build up of a semi Romanised town.  But then along came Augustus who suggested that it would be far better to move down from the hills and found a new town in the plain.  The new town, Augustodunum, flourished and is today Autun.  It is a story that is repeated in many places in Gaul.

Plan of Lugdunum, which became the capital of Roman Gaul. The Altar of the Three Gauls was erected at Condate, in the top right-hand corner.

Another major innovation took place in 12 BC when Augustus’s stepson Drusus established Lugdunum as the capital of the three Gauls by erecting a great altar to the Gauls at Condate on the other side of the river in the main town, which was to be the crowning point of the Romanisation of Gaul.

Roman Gaul was a great success.  The armies were established in two separate provinces of Upper and Lower Germany and this is where the excitement took place.  Sometimes it spilled over into Gaul itself, but Gaul prospered.  The civitas capitals were a great success and in the countryside there were numerous wealthy villas. True, Gaul was never entirely romanised.  There is distinctive Gallo-Romaine culture just as in Britain a Romano-British culture was to emerge.  Roman Gaul was peaceful — and prosperous.

On to: Failure in Germany

Header: The defences of Bibracte