How China was ruled: the case of Pingyao

Outside the palaces, how was China really ruled? The best place to study this is to go out into the countryside and see how the local towns and their counties were administered. I wish to take as an example the tourist town of Pingyao, where I happily spent a couple of days in 2014 and which provides a good example of a typical county town in the central part of China.

When in 220 BC Qin Shi Huang conquered the other six kingdoms to make himself Emperor and China a united empire, he was faced with the problem of dividing up and indeed eradicating the old kingdoms. This was solved by setting up 36 ‘commanderies’ which were meant to bear little relation to the previous kingdoms; the system was revised under the Han and were reformed into the provinces which are still the 22 principal administrative divisions of China today. In setting up the commanderies, the old feudal system of hereditary rule was broken, for the rulers of the commanderies were appointed directly by the Emperor. Throughout Chinese history there is the clash between hereditary rule (feudalism in Marxist terminology) and appointment from the centre.

The impressive walls of Pingyao

However the real control of the heart of China lay in its numerous towns and cities which are generally called ‘counties’. The number varied throughout Chinese history, but there were normally between 1,000 and 1500 – today there are 1456. Pingyao is one of these. Pingyao is situated 400 miles south west of Beijing, halfway between Beijing and Xian. Pingyao led an uninteresting life until the 19th century: like many towns, it had fine walls, constructed during the Ming dynasty in 1370, when many towns throughout China were walled. And it had the usual Chinese grid layout.

It rose to prominence in the late 19th century as a banking centre, when a deposit bank was established with branches all over the country, where merchants no longer had to travel with actual cash but carried promissory notes paid when they arrived. There were a number of such banks in Pingyao, and one in particular the Ri Sheng Chang (=Sunrise Prosperity) bank has become a tourist attraction and provides a good example of how a couple of wealthy townhouses could be converted into a busy banking premises.

Alas, by the end of the 19th century, the rise of the West produced new banking centres on the East Coast of China at places such as Shanghai and Hong Kong, and the Pingyao banks were simply in the wrong place and they gradually collapsed. Pingyao went to sleep.

Our sleeping quarters,  the bed in a recess in the wall. However it was updated by the television, left, and the little shower room, right.

The sleep continued through the Great Leap Forward and the Cultural Revolution: proposals were made to tear down the walls as happened elsewhere, but fortunately they came to nothing and the splendid walls still survive. And then in the late 20th century, it was realised that it Pingyao was one of the few Chinese towns that had preserved its traditional layout and a traditional flavour, and tourists began to pour in. Fortunately when I visited it in 2014, it still maintained much of its pristine magic.We spent the night in a traditional Chinese guesthouse sleeping in a traditional Chinese bed in a recess in one wall, and I was able to wander down streets filled with tourist shops and dream that I was back in the Chinese Empire of yore.

The crowded gateway to the Yamen, the governor’s house.

The administration of the county was based on the ‘yamen’, the Governor’s house. This was a sort of mini-palace, echoing the layout of the great Palaces such as the Forbidden City at Beijing. Yamen are often quite extensive, covering five or six acres, that is two hectares.

Plan of Pingyao. Note the meandering wall to the south where it followed the line of the river. The yamen, the Governor’s  house, is marked by a green cross

That at Pingyao was not placed of the North of the town but just off centre. However it faced south, and like the Forbidden City, there was an impressive front gateway, and then several halls which partitioned it off into a number of courtyards.

But the big secret of local administration was the method of appointment of the  governor, or county magistrate, – for his chief job was administering the law. He was sent out from Beijing and his main qualification was that he had no contact whatsoever with the area he was to administer: he was a stranger who could therefore be quite impartial. It was called the ‘Law of Avoidance’, and it ensured that he did not employ any relations, or had any connections with the local province. He had of course passed the exams – he would have been bright – though one suspects that in Pingyao, which was something of a backwater, he was not exactly a high-flyer; he would have been provincial rather than a metropolitan graduate. 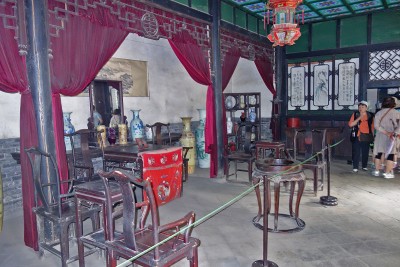 The county magistrate’s private quarters. He was meant to be a scholar gentleman,  with a desk on which he could practice calligraphy and write poetry

He would normally serve a three-year term, and had fine accommodation at the rear of the yamen, and when he was not administering the law, he would live the life of a scholar, writing poems, practising calligraphy, and playing chess.

The central courtyard of the Yamen, with the government offices to either side.

The work of the yamen was divided into six sections, echoing the structure of central government. On the left, that is the east, were the civilian departments: personnel, the all-important revenue, and the expensive one, the Rites: at the national level this also acted as the foreign office , and I suspect that one of the principle though unstated duties was to operate the workings of ‘gift exchange’; this was where gifts are given out to foreign embassies to bribe the barbarians not to invade; and on the local; level, this was where gifts were given to local bigwigs to keep them sweet.

The governor’s office where as a magistrate he would dispense justice. On the wall behind there is the sun and the ocean, and on his desk there are the wands marked red and black with which he would pronounce his judgement, guilty or not guilty

On the right side, that is the west, were the Office of Works, the Military Office, and the Board of Punishments. The Chinese were slow to develop any abstract concept of the rule of law, and thus the emphasis was on the punishments: the magistrate was not expected to administer the law but rather to give out punishments. Thus there was a saying that those on the East, that is the left, govern our lives, while those on the West govern our deaths.

All this involves an extensive bureaucracy. There were 20 to 30 registered clerks under the licensed head clerk, and there were many more non-quota clerks, depending on local conditions. More numerous than the clerks were the runners, whose duties included all the menial work of the yamen and who also acted as constables: there were normally at least 200 people in all.

The system worked well on the whole, though in practice there was a constant clash between magistrates sent out from Beijing, and the local lords who always tried to seize control, particularly in the military districts, where power lay with the generals, who often appointed their own followers and members of their own family: there was a constant struggle between the ‘patrimonial’ system (where one appointed one’s relatives and followers) and the county system. The county system possibly only worked for half the time in half the country; but when it worked, it usually worked to the benefit of the common people who tended to be treated more fairly by the county magistrates than they were by the local lords.

It is all very different to what we are accustomed to, here in the West. There was no concept of the town council made up of local people, the curia in the Roman Empire or the town council in mediaeval England, or of towns being chartered corporations. China was totally different with the magistrate being imposed from the outside, but chosen for his ability, and assumed to be neutral and impartial because he was serving in a province that was not his own. On the whole, the system worked well. You did not have to bother with all the wearisome business of elections and the changes and inconsistencies with a new regime – and it is certainly less divisive. It worked well for nearly two millennia: should we not note its strengths?