The stadion at Messene

If you want to see a good example of a nice civilised Grecian town in the Roman period, you cannot do better today than to visit Messene. This is surprising, because the classical view of Messene is quite the reverse. In 720 BC, Messene was conquered by the Spartans, and for the next 350 years the Messenians were kept as helots, little more than slaves, who supplied Sparta with the economic basis that enabled them to be gentlemen soldiers. 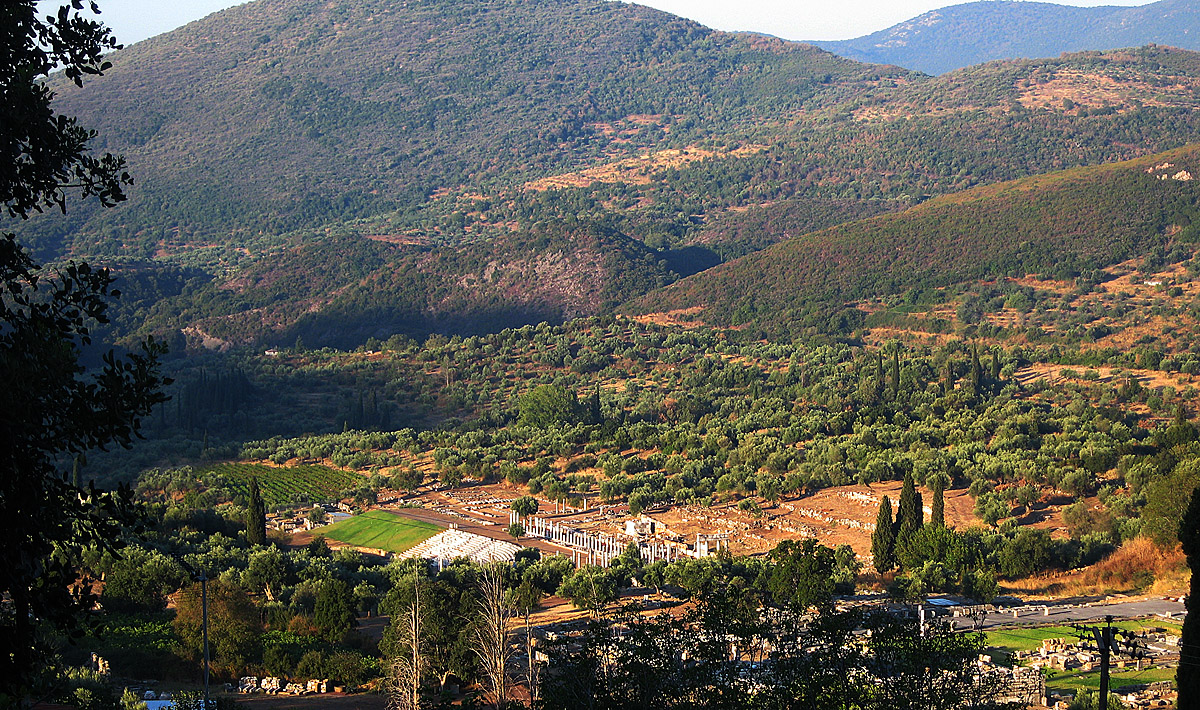 General view of Messene, nestling in its fertile valley

But today, Messene is smarter than Sparta. In 371 BC Sparta was defeated by the Thebans, and Epaminondas, their leader, realised that the best way to ensure Spartan subservience was to plant powerful cities around her periphery, most obviously at Messene.

One of the first things they did when Messene was re-built was to erect powerful defences in case the Spartans should ever try to invade again. This is the Arcadian Gate, a  circular structure, still in use, though the lintel of the inner gate has fallen down and  cars have to swerve round it.

There had never in fact been a city at Messene before. In the eighth century, cities were only just being founded in Greece, and Messene was no more than a series of villages. The new town of Messene was founded over one of the largest of these, at the foot of Mount Ithome, to one side of the modern village of Mavromati. (The modern town of Messene is on the coast 14 miles away — it was the medieval town of Nisi, but in the early 20th century, when the Greeks were going through a phase of purifying their language, they renamed it Messene: they were about 14 miles out). But Messene is one of the few great Greek cities not to be covered by a modern city.

One of the first things they did was to surround the new town with extremely powerful walls, just in case the Spartans should ever be tempted to try to invade once again. One of the strongest gates, the Arcadian gate, still largely survives, with modern day traffic going through it, curving around one of the lintels that still remains at a drunken angle on one side of the circular gate.

The temple of Asclepios, now totally destroyed, which lay at the centre of this square.

It is part of our theory is that grandiose temples are a sign of barbarism, but nevertheless there are temples at the heart of most Greek towns, and this was the case at Messene, where this panoramic photo shows the Temple of Aesculapius who was the patron saint of Messene. (Aesculapius is the Latin form: in Greek he was Asklepios).

The Temple of Asclepius was the ritual centre of the town.  Over 140  statue bases have been found, mainly of political figures.

Aesculapius is normally the god of healing, and his temples are surrounded by dormitories where the worshippers came to sleep so that they could be cured by the god in a dream. However here Aesculapius was not a healing god, but the most important local god.

The Temple was surrounded by a wide corridor on all four sides. These were essentially stoas, the covered meeting places that were typical of Greek cities. On the right, under the covering, is the Artemision, the temple of Artemis.

He was the son of Apollo who was a somewhat randy god, who went round deflowering young virgins, and when he came to Messene he bedded Arsinoe, the daughter of the king, and the result was Aesculapius. A fine temple was erected in his honour at the heart of the town. There was indeed an Agora, the commercial centre of the tow, but this lies under a field adjacent and has not yet been excavated. But from the ceremonial point of view, the Asklepieion, surrounded by its fine stoas, and ornamented by numerous statues, was the centre of Messene.

To one side of the courtyard was the Artemision, the temples to the goddess Artemis. It is described in detail by Pausanias, and it was clear that by his time in the second century A.D., like many temples, it was overwhelmed by the clutter of the various statues that had been offered.

To our eyes, the Artemision was facing the ‘wrong’ way, that is it was a rectangular structure  facing out onto the courtyard,  with the cult statue  at the centre of the long side. Here we see the base on which the famous statue of Artemis by Damophon was set. In front of the base on the left was the offering table, and on the right was the money box where pilgrims were encouraged to make their offerings – just as in modern churches today.

In one corner of the great enclosure there was a shrine to Artemis which was described in detail by the Greek traveller Pausanias. Like many Greek temples, by the second century AD it had become cluttered with offerings and many of the statue bases have survived so it is possible today to get some idea of what a Greek temple looked like in the second century AD: cluttered.

The small shrine to the goddess Orthia. Orthia was a local goddess. only worshipped here and at Sparta, but whereas at Sparta she was a goddess of men and boys who were soundly flogged at her altar, at Messene she was the goddess of women and girls where gentler rites were practiced.

Adjacent to it though is also a small temple to Orthia the same goddess as was worshipped at Sparta. But the fierce floggings that took place at the Temple of Orthia in Sparta had no place in Messene — she was purely a local god, and it was only the Spartans who enjoyed flogging young men.

The Temple of Asclepius and its surrounding courtyard was very much the centre of town life. At the eastern end was this semicircular meeting place, the ekklesiasterion, or meeting chamber where political meetings took place.

However, to one side of the Temple we get something that is more like Greek democracy, a semicircular theatrical style building seating 800, which was the ecclesiasterion, where the town council met and plays and musical concerts were held. Beyond it, on the other side of the entrance way were the offices of the council including a large archive room.

The magnificent stadion or race track at Messene, now lavishly restored thanks to generous EU grants.  In the third century AD  it was shortened  to make it more suitable for wild beast fighting.

But an even greater glory of Messene was its stadion, or racetrack, in a magnificent position at the head of the valley. It has now been mostly restored to give some idea of its
very considerable seating capacity. However in the third century it was cut into half and at the far end a semicircular wall was inserted to turn it into an amphitheatre for wild beast fights. At the far end of the stadium was a mausoleum to the Saithidae family, the leading family of Messene in the first and second centuries AD. At the time of the battle of Actium, when Augustus finally defeated Antony and Cleopatra, Messene backed the wrong side, and Messene had to do some very fine footwork to get back into Augustus’ good books. But they were successful, and as in so many Greek towns, from the Augustan period onwards they thrived.

There was also a fine theatre which is now being restored. However the only baths to have been discovered was a small set on the north side of the Asklepieion.

The site of the agora, or marketplace is known, just the north of the temple of Asklepios, but it has not been excavated.

In the sixth century there was a revival  of Christianity, and this large church was built in the centre of the town

In the fourth century AD, Messene went into decay as the drainage system became blocked and much of the town was covered with silt and many of the temples fell into decay. It is tempting to ascribe this to the decrees of  Theodosius closing the pagan temples, but it appears that the temples were already in decay at this time. However there was some sort of revival in the sixth and seventh centuries, when a Byzantine settlement was laid out on rather a different alignment. Recently a substantial Christian Basilica was discovered that had been built in the 7th century and continued in use till the Frankish period, when burials were laid out in the aisles.

On to Mistra – medieval Sparta