But it was not just in high culture that Athens excelled. The best evidence for the Athenian miracle comes at the other end of the spectrum, the pottery produced and sold in the marketplace and exported widely all over the Mediterranean. This is art, not for art’s sake, but for money’s sake, art produced for the marketplace essentially for a middle-class market, where the potters were always working under time pressure to produce what could be sold. Yet the Athenian pottery of the sixth and fifth centuries is some of the finest pottery the world has ever seen. How was it produced?

Greek pottery begins with the decline of Mycenaean pottery. In the 11th century BC, fine Mycenaean pottery with its swirling sea creatures disappears and is followed by miserable Sub-Mycenaean pottery, with its occasional circles drawn by hand. A slow revival begins in the 10th century with Proto-Geometric pottery where the potters have learnt to use a compass with multiple heads to draw concentric circles.

The great Greek revival begins in the 8th century with the adoption of the city state, and this coincides with the geometric style of pottery, where every square inch of the pot is decorated with geometric designs. The best of these are very large pots which appear to have been used as grave markers in which panels of rather stiff figures show funeral scenes. The stiff and unformed style somehow reflects a stiff and unformed society.

Athens leads the way in the Geometric style, but in the 7th century Athens falls behind. Its population declines and its pottery is outsold by the pottery from Corinth, which is easily distinguishable because the clays of Corinth produce a lighter, yellowy fabric as compared with the naturally red pots of Athens. The 7th century was the great age of Greek colonisation when many states felt that they were over populated so they sent out colonies: but there are no Athenian colonies in the 7th century. The 7th century was the time when Greece came under oriental influence: flowers and floral decoration began to replace geometric style in pottery decoration, and exotic eastern animals such as lions began to make their appearance. Among other innovations the alphabet crept in and potters and painters began signing their names.

But in the 6th century, Athens bounced back, and so did its potteries. The political revival was led by Solon in the first part of the century and then by Peisistratus and his sons in the second half of the 6th century. Solon encouraged the immigration of craftsmen and pottery production benefitted. Athenian pottery once again had the edge over Corinthian pottery, and Corinthian pottery declines in the overseas markets. The big innovation lay in the ‘black figure’ pottery where black figures were painted on the red background, with incised lines indicating the details of the figures. The finest of these is the François vase exported from Athens to Etruria where it was discovered in the 1880s and is now in the Florence Museum. The decoration is arranged in six panels, with 270 figures in all, in 10 mythic scenes; there are 121 inscriptions telling us precisely who is who in their various scenes. The potter and painter sign their names – Kleitias and Ergotimos. Greek vase painting has come of age.

Around 520 BC came the great revolution: ‘black figure’ was replaced by ‘red figure’. It was realised that a far more realistic painting style could be produced by first outlining the figures, then painting the background black, and leaving the figures in the red of the body clay on which the internal lines could be drawn in black. More expression could be introduced showing figures twisting and in three-quarter view; and the potters showed their favoured decoration: myths, athletics and what John Boardman nicely calls the ‘pleasures of the table’. The new style sold extremely well on the home market and also in Etruria, the most important of the export markets, and it was predominant in the great age of Athenian pottery in the 5th century BC.

The latter part of the 5th century saw Athens mired in the Peloponnesian war with Sparta, but as so often the arts went off in a different direction and turned their eyes away from the horrors of war to escapism, to a more voluptuous style with fantasies of paradise gardens, peopled by goddesses and nymphs. Vase painting became more feminist, with more scenes showing the toilette of a bride, and with shapes more suitable to women – jewellery boxes, toilet vases and vases for perfume. The markets too shifted with Etruria being replaced by the Black Sea as providing the major outlet for the Attic potters, perhaps in recompense for all the corn that the Black Sea was sending to Athens to stave off the Spartan blockade.

At the end of the 5th century the Peloponnesian came to an end with the defeat of Athens by Sparta and the demolition of the Long Walls. Athens survived, but Athenian pottery was passed it glory days. The colonies abroad learnt to produce their own pots, and major centres sprang up in Italy, in Tarentum and Paestum. And in the 4th century, people became richer and were able to afford metal vessels to a greater extent.

I sometimes like to think that barbarian art is superior to civilised art because in a barbarian court the craftsmen is working in a defined tradition and is given infinite time to produce perfection. However Sir John Boardman, the doyen of Greek art gives the counter argument when he remarks that “in a free market ‘taste’ can influence production more quickly than in a royal court”.

A good example of this can be seen in the so-called Panathenaic vases, the most prestigious of the black figure vases. In the 550s, the tyrant Peisistratus in his campaign to boost the glory of Athens, established the Panathenaic Festival with games and a great procession through the market place up to the temples on the Acropolis, and as prizes in the games, special Panathenaic vases were commissioned. These are a rare example of vases not being produced for the market place, but commissioned by the state. The top painters, Amasis and Exekias, produced their best works for these vases, – money no object here. However when the red figure style swept the market at the end of the sixth century, the Panathenaic vases did not follow suit and continued to be produced in the black figure technique throughout the fifth century. State sponsorship was inflexible.

In the vitality and virtuosity of the Greek potters in the 6th and 5th centuries,  we see the market going its own way, ignoring the triumphs and disasters of the Persian and the Peloponnesian wars, but producing ever more lively pots on a great variety of subjects, sometimes lofty myths but more often the more intimate pleasures of wine, women and song. Many of the pots were for the home market, but the home market seems to have included virtually all the cities that could claim to be Greek. But it went far beyond that, to the Greek colonies, and to the rich patrons in Etruria in the north of Italy, who preserved so many Greek pots in their rich tombs. 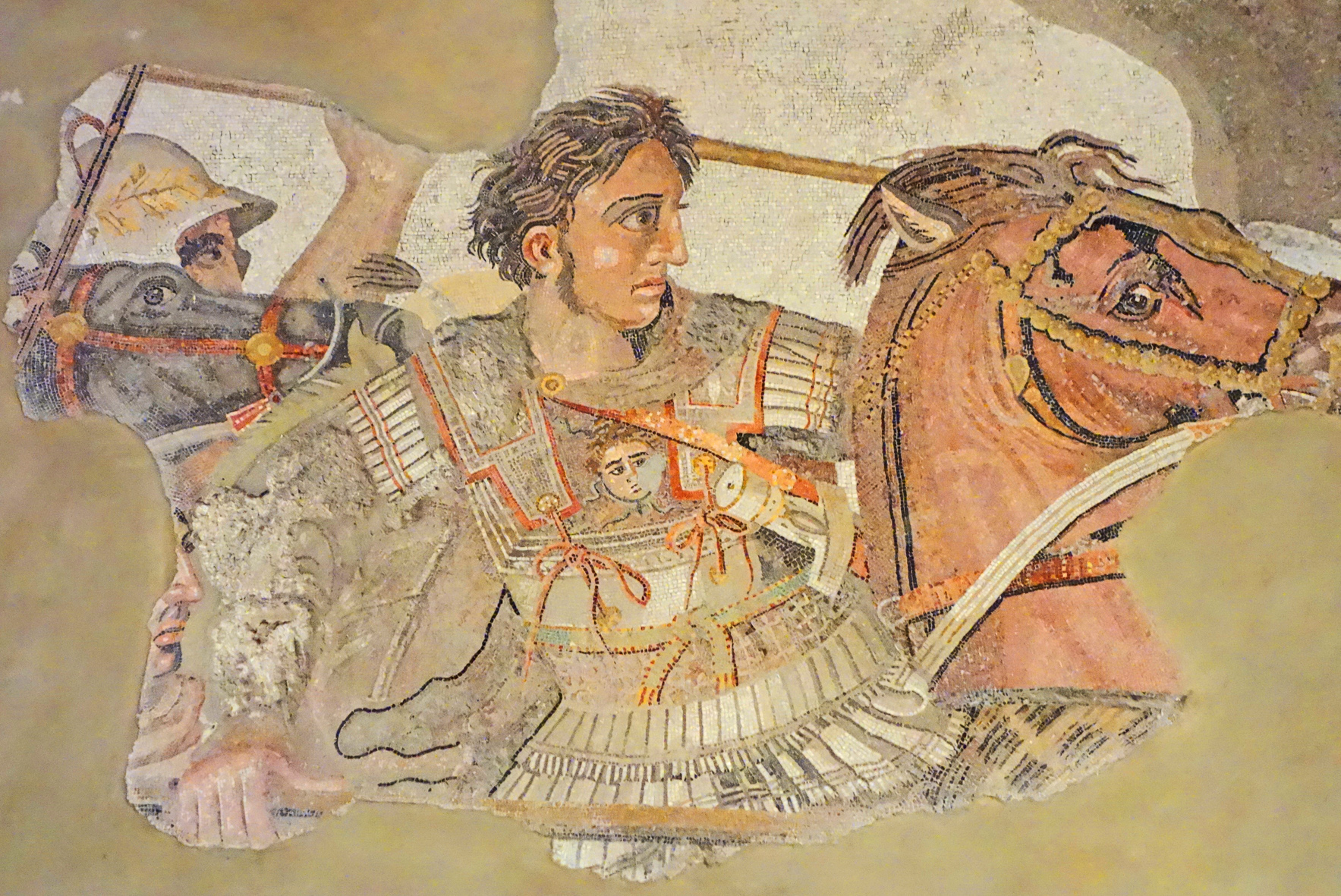 But the importance of Greek pots is not just in the industrial history of Greece, but also in the light they throw on the progress of Greek art. The Greeks virtually developed drawing and painting as we know it, but sadly none of this has survived directly. We know from the descriptions of their leading painters that they invented perspective and pioneered the control of shadow.  It is said that some of them produced paintings so realistic that when they painted a bowl of grapes, birds came down and tried to peck at the grapes. Similarly when one painter was asked to draw aside the curtains so that the rest of his work could be revealed behind them, he went up and showed that the curtains themselves were a painting. None of this has survived directly, though we know that the most famous of the stoas in the market place at Athens was the Painted Stoa, which was virtually an art gallery of paintings by all the leading painters.

Paestum, the Tomb of the Diver. This is one of the side slabs, showing on the right two lovers staring into each other’s eyes, while on the left the group is playing kottabos where they compete to throw the dregs of the wine into an urn – a popular game at drinking feasts

The best reflection of Greek wall paintings comes from outside Greece itself, from the elaborate tombs in Etruria and Macedonia, which were painted in Greek style but often without Greek elan. The finest is probably that from a tomb in the Greek colony of Paestum in southern Italy, where the Tomb of the Diver shows a young man presumably the deceased occupant of the tomb diving off a high diving board into the Sea of Eternity, while to the side are pictures of a homoerotic feast.  Greek painting appears to have been one of the great Greek achievements, but sadly all that remains of these achievements can be seen in the market splendours of Athenian red-figured pottery.

How other cities used their Marketplace

On to Alexander the Great