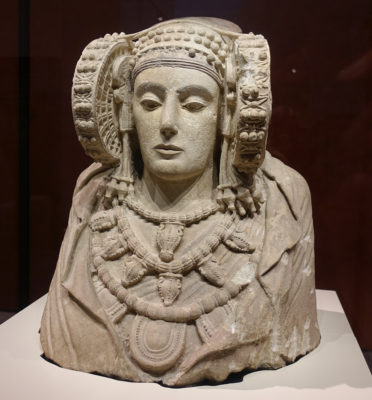 The native Iberians had a fine tradition of sculpture. This is the Lady of Elche, one of the finest pieces of monumental sculpture in the National Museum in Madrid

An early problem for the Romans came with Spain. Spain was a problem which they inherited from the Carthaginians. After their defeat in the first Punic War (264-241 BC ) the Carthaginians lost their empire in Sicily, so they decided to build a new empire in Spain, where they already had a scattering of colonies along the coast. Their campaign was very successful and in a little more than a dozen years they conquered much of Spain.

However after Rome’s victory in the 2nd Punic war (218 – 201 BC) the Romans suddenly found that they inherited the Carthaginian’s half-built empire in Spain. They arranged it in two provinces and for the next 200 years they struggled to get Spain into some sort of order with a constant series of wars between the Roman governors and the ‘natives’. But who were these natives?

Spain was in fact occupied by a thriving native culture called the Iberians, or the Celtiberians where they mixed with invading Celts from the north. Along the coast there were already a series of foreign colonies. To the North there was the Greek colony of Emporion, which means simply ‘trading station’ in Greek, which was established around 575 BC from Phocaea. Further south on the Mediterranean coast there were the Phoenician and Carthaginian colonies, notably Cartagena which the Carthaginians had established as Nova Carthago, while further round was Cadiz, the border town where the Mediterranean met the Atlantic. And beyond that in south west corner of Spain there were the relics of the once great empire of Tartessos, which had grown rich by trading copper and silver to the trading cities of the Phoenicians.

Inland however there were the thriving native peoples known as the Iberians. These were divided into two: the main Iberians to the South and to the North the Celtiberians, formed when Celtic tribes invaded Spain in the 6th century BC and merged with the Iberians. However whereas the Iberians spoke their own distinctive language, which is non-Indo European, and may or may not be related to Basque, the Celtiberians spoke a Celtic language similar to that of the Gauls, and indeed the modern Welsh.

They had a lively culture best known for a series of fine sculptures, notably the Lady of Elche, and also La Dama di Baze found in her tomb, seated in her winged chair, with several vases and sets of armour at her feet (why?) Then there are the tower tombs, notably that from Pozo Moro, found in pieces but reconstructed in the National Museum.

The best known remains however, are those of the Castro culture in the West, in Lusitania and Galicia, spreading into modern Portugal. It was a hillfort culture, and many of the hillforts have survived, notably the Cividade de Terroso which was excavated in the 1890s.

Some of the Roman rulers were extortionate, and some of them, when they returned home were prosecuted for extortion: the Romans were not angels, but they had a strong underlying feeling of right and wrong.

The siege of Numantia, showing the defences of the Celtiberians, and the circumvallation of the Romans, which penned them in, and starved them out.

The wars reached their culmination in the Siege of Numantia, the leading town of the Celtiberians, 200 kilometres north of Madrid, where the Romans eventually assembled a huge army and built a circumvallation 9 kilometres long around the defending walls. Eventually after a heroic defence, the inhabitants were starved out, and as a result the Romans came into control of most of central Spain

However the fierce tribes to the North and West were still beyond the Roman reach, and the Romans eventually faced the problem of how to form a boundary. And here the solution was obvious, they had to be conquered. Augustus himself took to the field and from 29-19 BC the fierce Cantabrian Wars were waged, with Augustus himself leading the campaign in 26 and 25 BC, though he fell ill and had to spend the winter in Tarragona on the coast, which later became the capital of the northern province.

Eventually Spain settled down. One of the big secrets was the establishment of towns which the Romans hoped would introduce Roman civilization, of at least the Roman way of life. Towns such as La Bastida de les Alcusses were already established in the fourth century, and as Professor Ripolles has argued, the beginnings of the market economy can be seen in the form of pieces of silver chopped up to form a primitive system of exchange.

The Romans encouraged the development of towns, and coinage was produced in vast quantities – over 160 towns are known to have issued coins in various scripts and various languages, and eventually some 77 of these towns were rewarded with the privileges of being converted into Roman municipalities.

In addition, a large number of colonies, that is settlements of ex-soldiers, were established. In the Roman civil wars, the leading participants raised huge armies, and when the soldiers completed their service, they had to be settled, and Spain became a favourite place for establishing colonies: between them, Pompey, Caesar and Augustus founded 23 known colonies. The establishment of a colony must have been a traumatic event for the natives, but it did mean that by the time of Augustus’s death, Spain was becoming fully urbanized.

In preparing these this page I have very much enjoyed reading a splendid website by Pere Pau Ripolles, Spain’s leading numismatist, and Professor at the University of Valencia. The website, from which several of these images are taken, is hosted by the Museum of Prehistory of Valencia, (or Mupreva for short) at http://mupreva.org/pub/853/va : it is 55 pages long and a very good read!