How far is Knossos typical? There are three other palaces in Crete which have been excavated and can be examined, Phaistos, Malia and Zakro.  They all have additional features which in many ways display better the features of the palatial economy, and help build up the picture of how these are Minoan palaces really worked.

Map of Crete, showing the four excavated palaces. Note too the position of Khania in the West, which was almost certainly the site of another major Palace

The best known and largest is that at Phaistos which was excavated by an Italian team under Federico Halbherr at almost the same time as Evans was excavating at Knossos.  Phaistos lies towards the south of the island.  Crete is a long narrow island which geologically slopes from south to north so that best harbours and best beaches are along the north coast, and the south coast is bleak and inhospitable.  However Phaistos is situated in the south just inland from the most suitable harbour, and presumably ruled over the southern part of Crete.

The central courtyard at Phaistos from the north looking South. To the left are the northern buildings,  the main residential/formal areas. Note the West Wing to the right, where there is a ‘display area’ where the treasures could be displayed.

Phaistos: the central courtyard from the reverse direction, from the south looking north. Note the mountains in the distance with the sacred Mount Ida, the birthplace of Zeus at the centre, its peak hidden in the clouds. Was the courtyard deliberately oriented on the sacred mountain?

The Palace at Phaistos. The later Palace is in solid lines,  the earlier Palace in outline. Note the very elaborate West Court

There is a fine set of magazines opening off from the central courtyard and also a large room which appears to be a ‘display area’. Such ‘display areas’ seem to be a normal part of the palaces, adjacent to the magazines,  and it is imagined that this is where some of the treasures could be displayed, particularly the textiles, the blankets and the dresses which the Linear B tablets reveal to have been a prime produce brought in to the palace as tribute.

The magazines at Phaistos. The magazines were laid out along on either side of the broad corridor beyond the girl in white. In the foreground is the display area where the treasures (textiles?) were displayed. 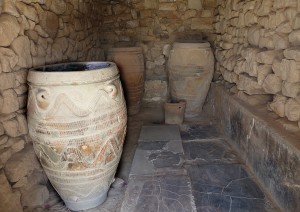 Inside one of the storerooms that line the central corridor. These large jars would have contained oil.

The central corridor that ran off from the display room was lined with pithoi, the large jars that contained olive oil. They would have formed an impressive display of wealth and power to visitors to the place.

The Western court at Phaistos. The grand staircase belongs to the earlier Palace and was cut off halfway up by the retaining wall of the later Palace. The later staircases to the right lead up to the main palace buildings.

There is also a very elaborate western court which appears to have been a grand theatrical area. It was originally built in the Middle Minoan period, of which there are extensive remains at Phaistos.

The grand stairway that leads from the West Court to the grand rooms on the first floor.

This courtyard in the north east corner of the palace at Phaistos has an oven or kiln at its centre. Were the small rooms round the outside workshops?

One of the most interesting aspects is in the north eastern corner where there is a workshop area, a courtyard with a bronze working furnace at the centre. Presumably this was where the jewellery and other knick knacks were produced that formed an essential part of the gift exchange system, which the rulers could distribute to their followers.

It seems strange to us to have a workshop in the corner of a palace, but this emphasises the importance to the rulers of having rich jewellery which they could distribute to their followers

Malia has a factory …  and a town

Malia: view through the southern approach to the courtyard with the factory on the right and the ritual buildings and magazines to the left. The excavated parts of the town are off to the top left

Plan of the Palace at Malia. Notice the eight circular granaries bottom left, and the mysterious ‘factory’ to the right.

Malia lies like Knossos along the north coast, thirty miles east of Knossos. The modern town of Malia is today one of the most fun loving and garish seaside resorts in Crete, but the palace lies a couple of miles beyond.

The display area in the Malia Palace with the magazines beyond

As at Phaistos, there is a fine ‘display area’ on the western side of the courtyard with rows of magazines beyond. To the south is a ritual complex with a pillared hall and symbols of the double axes carved on some of the walls.  Just near the entrance in the south western corner there are eight circular bins in which grain had been stored.

However the most interesting feature is on the eastern side of the courtyard where there is a large room with channels cut in the floors which appears to have been a  ‘factory’ where olive oil was processed.  We tend to think of olive oil in an essentially practical way, used for cooking and lighting, but it can also be processed into cosmetics and aromatics, which made particularly valuable gifts for the ladies. Whether this was the function of this room on the eastern side of the courtyard is uncertain and controversial, but it is preserved under a cover building, and surely had something to do with the processing of olive oil. 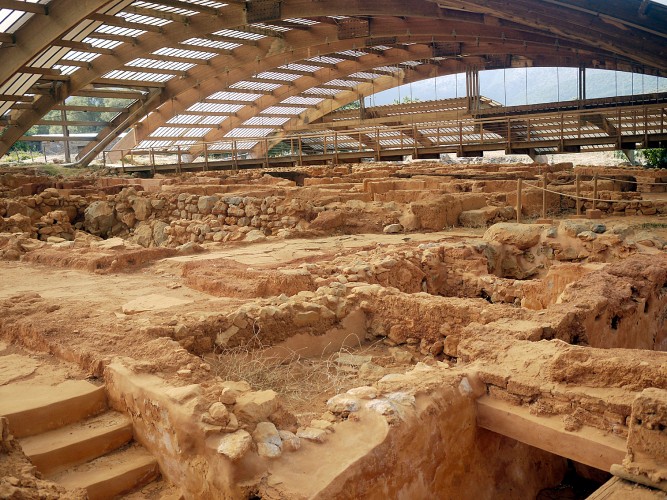 At Malia, the palace was surrounded by a very extensive town, and a large area of this has been excavated and preserved under a cover building a hundred yards or more away from the palace.  The buildings belong to several different periods and are not always easy to interpret, but they give a vivid picture of what life must have been like in the busy towns that surrounded these palaces.

The Palace ant Zakro nestles on the flat ground at the foot of the hills forming the Eastern end of Crete. It faces East, towards Cyprus, rich in copper.

The fourth palace is at Zakro which lies at the extreme eastern end of Crete, facing eastwards towards Cyprus, the great source of copper.

View across the courtyard of the Palace at Zakro, with the buildings of the town rising behind it

The archives where a hoard of Minoan linear A tablets was found. Beyond are the cupboards were the ritual objects were stored.

Zakro is both a palace and a town, indeed the town which lies on the flank of a hill was excavated first, and the palace which lies on the flat ground at the foot of the hill was only properly excavated by Nicolas Platon in the 1960s.  Today Zakro is little visited – being at the eastern end of the island it is off the tourist route, but Platon’s excavations revealed a rich array of ritual objects, while the town on the lower slopes of the hill provides another good example of what a Minoan town looks like.

Plan of palace,  adapted from Ian Swindale, MinoanCrete.com. Note the position of the dining hall and the kitchens

Zakro: view of the courtyard in the opposite direction, that is seen from the buildings in the town across the Palace. Note the extensive ceremonial buildings to the right. In the middle foreground are the kitchens that serve the banqueting hall to the right.

Zakro: the main road through the town leading to the harbour. The Palace is to the right.

View from Wikipedia of the Venetian harbour at Chania. Somewhere under the buildings is a Minoan Palace.

There must also have been another major palace at Chania, whose exact position still remains unknown. Chania is the second largest town in Crete towards the western end of the island, and was previously the capital of Crete.  It is a town rich in history – Venetian and Ottoman – and underlying it all is a major Minoan palace.  It is clear that there must have been a palace there because of the discovery of writing tablets,  not only of Minoan Linear B but also the earlier Linear A.  Indeed there are only three sites in Crete where Linear B has been discovered: at Knossos, Malia and Chania, so these must have been the major towns in the final phase, when Crete came under Mycenaean influence.  Numerous fragments of a Minoan settlement have been found but it is not yet possible to work out the plan of a palace.

Several other palaces are known, a palace being defined as a building with a central courtyard.  Their construction is spread over the whole of the Minoan period that is more than the millennium from 2200 to 1200 BC.  There was clearly a long and complex history but the four best-known palaces offer a vivid picture of life in a society dominated by palaces.