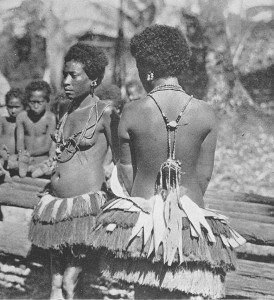 These bare-breasted ladies are displaying the necklaces that were some of the most valued jewels to be passed round in the kula ring.

And finally there is the most famous system of all – the Kula ring. This was exchange at its highest level when one chief makes a ‘gift’ to another chief, often hundreds of miles away across the open sea. The gifts were essentially ritual, not what one would consider valuable but arm bands or shell necklaces. Nevertheless they were treasured and handed on every year like pass the parcel. If you waited long enough your gift would come round again. At its simplest, there is gift and counter gift. The initial gift is called the Vaga and the final counter gift is offered on the following Kula. This is called the Yotile or clinching gift. However if a suitable yotile is not immediately available,  you give an intermediate gift,  a Basi, as an indication that on the next trip a yotile of proper value will be available.

A ceremonial act of the kula. The chief stands to the right in front of his house. Facing him is the visiting headman bearing a valuable necklace on a pole. Behind him, his second-in-command blows a conch horn, and behind him, is another man with a gourd water bottle. The headman offers the necklaces to the chief who in return gives out some valuable armbands.

If you know that your Kula partner has a particularly valuable Vaygu-a that you want, you can offer solicitory gifts. This begins with a gift of food, a pig or a bunch of fine bananas or yams. If this is accepted you go onto the second class of solicitory gifts of greater value e.g. a polished stone axe. If this is accepted it means that the desired gift will be forthcoming on the next Kula trip. 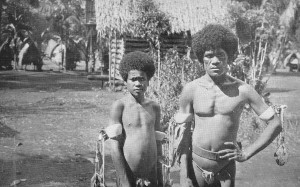 Two young men, wearing the armbands that were considered among the most valuable prizes in the kula ring system.

Thus the Kula comes close to trading, that is the equivalents of value is at least calculated. However in gift exchange and in the Kula you still aim to give away something of greater value than you receive. This is quite the opposite to market trading when you aim to make a profit on the deal. This way of life is quite typical of primitive economics. Indeed gift exchange or tribute economy is the norm in much of the world. Alongside it is a structured form of society – at its simplest a chieftain society but at its most complex becoming something very elaborate such as the caste system in India.

The gift exchange system delineated with such clarity in the Trobiands is probably the norm in most of the world. The economic system that we enjoy in the West is in fact the exception rather than the rule, and we must expect to find it to some degree being prevalent in  most countries prior to the advent of money and the market economy. 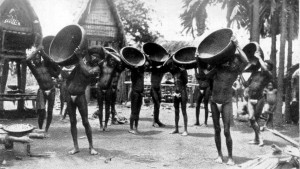 This is the largest type of cooking pots, used only for the preparation of taro pudding. They are an article of high value and are often displayed in connection with ceremonial distributions and communal cooking.

What is even more important to remember is that large aspects of gift exchange and prestige giving remain prevalent even in market economies. When modern economists condemn bribery they should think first that they are probably condemning a practice that is the norm in most economies. Similarly when a father gives a wedding for his daughter with a lavishness to impress all the guests, or when someone buys a car whose performance is far in excess of practical needs, we should remember that this is merely the display of prestige, and prestige is something that in the long run is often considered to be well worth acquiring.

There is finally a more sombre assessment to be made. Gift exchange is not only inefficient both as a means of distributing goods and as a means of giving prestige, but it is also curiously unsatisfying. Whereas in a market transaction both sides can, and normally do, come away with the feeling that they have, if not a bargain at least value for money, in gift exchange both sides often come away dissatisfied that they have not received the gift they deserved. Ultimately this makes such societies less stable, less friendly, and more warlike than market economies. The market ultimately is the great precursor, not only of prosperity, but also of peace.

Non-money societies are not always simple: indeed they can often be very complex and extremely successful, such as the societies in Egypt and Mesopotamia.

I begin by looking at the best example of these palace societies, the Minoans.